Written by Sabarmati Roy
Around 60 of us were taught to collect all the plastic waste we generated and store them in a bag, instead of throwing them everywhere. 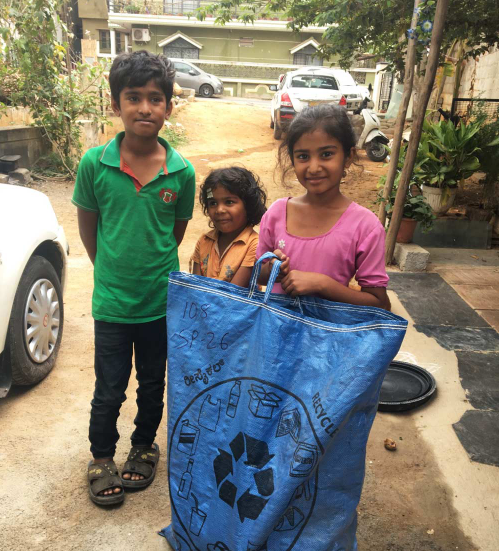 I had been on a trekking trip to Srikhola, in Darjeeling, when I was 12. Around 60 of us were taught to collect all the plastic waste we generated and store them in a bag, instead of throwing them everywhere. The mountains are precious – like you and me – we were told. This practice stayed with me ever since and I wanted to know more ways about how to curb the growing menace that waste is.

Two weeks back, I took my first steps towards understanding the nuances of waste segregation and the innumerable ways in which WE can curb the problem. The Saahas NGO team visited one of their project sites near Puttenhalli Lake, in Bengaluru. The team had distributed big blue bags a week earlier to all households, for storing dry (non-biodegradable) waste in them. A week after, Divya, the CEO, decided to accompany the collection team and interact one-on-one with the locals for an impromptu door-to-door awareness campaign. There’s a low-income settlement bordering the lake and they have been dumping their waste in and around the lake as the collection of waste is irregular their area. This is, in turn, affecting the eco-system, resulting in an unhygienic settlement. What I experienced next, is going to be a part of me forever.

Touching your waste is liberating

As we know, convincing people to segregate is the toughest part of any campaign. We started off with the first house in sight. Turned out, they had mixed food waste with their dry waste, which then became a common sight for the rest of the houses. Now, however dedicated I am towards the subject, honestly, I was not expecting to have to put my hands in a garbage bag with a week’s mixed waste. It was needed in order to show the resident that only a particular kind of waste actually goes into that bag. So, I did, because Divya did, and so did everyone else in our team, throughout the day. It was liberating, to say the least. And perhaps the most convincing way for the locals to understand how responsible we should be about our own waste.

We covered some of the bigger apartments and households there too. Common hurdles we faced were: At 9 am, most of the residents were already out for their work; plastic laminates of biscuits and chips packaging, were used widely for burning as fuel for cooking; food waste was being packed in plastic bags and dumped at black spots around the area ; some of them even sold off the waste collection bags to local raddiwala expecting Saahas to  not return for collection.  Most importantly, people did not care much since waste segregation is the least of their worries in the daily life.

Children are the torch-bearers

The following day, I went to a small village in Chikkajala for a door-to-door campaign. Reactions and enthusiasm were similar here as well.  The silver lining here were the children. They were at home due to summer vacations and very keen towards understanding the problems. In Chikkajala, I loved how their eyes sparkled when I told them how they are influential in the process, how each of us can do our bit to bring a bigger change.

Seen in this picture are siblings who ran to us with perfectly segregated dry waste. Children like them are the best candidates to be moulded for a better future!

Role of the educated, privileged youth

Saahas Zero Waste also works with the bulk generators like Tech Parks for IT companies where they have fully functioning composting units and dry waste sorting setup. I had the good opportunity to visit one of these tech-parks for our first awareness campaign. This experience too was unique in its own sense. While we would expect a much better response from the highly educated crowd than the villagers or slum-dwellers, the reality was far from it. We had different designated spots to go around talking to people, learning about how they see waste as a problem, and telling them about different ways to curb waste generation. Some of them asked us to leave because they were having a meeting at lunch, some agreed to bring their e-waste to the office, some laughed at the mention of waste, and some others hurried passed lest we end up stalling them for a long time.

The educated youth is busy – to earn, to excel, to succeed, to afford a better life. But what we miss in this daily grind is seeing the bigger picture. While we succeed in achieving our goals, we are leaving behind mountains of toxic waste for our next generations. I love plastic products though, they are super convenient. What we lack is an equally convenient biodegradable alternative to plastic. But before that is achieved, we need the willingness to make little changes in our lifestyle and cut down on every unnecessary usage of plastic, one step at a time.

Conversing and then convincing people to segregate is a herculean task initially. The task is a continuous process. It gets progressively simpler when people begin to realize that source segregation is just one added step in the daily chores.

The rate of waste generation is directly proportional to the rate of consumerism.

Contrary to popular belief, not all plastic is recyclable, and not all recyclable items generate high revenue.

The first experiences on the field made it evident – and I can’t highlight this enough – whatever little change you or I make, is still a change. The world needs more changemakers, and today is the day to start!